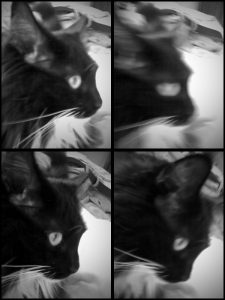 My wife tells me it’s because when a woman wears heels they’re tilted forward, and the thing the woman in my riff below does with her foot, is to bend the foot the other way…it’s a salve. Okay. This is what my wife tells me, and I guess she ought to know — being a woman who has worn high heels.

It’s raining and normally, you love the rain, would focus on the rain, write about the rain, show your love for the rain, but today the woman across the café is doing this thing with her foot – she lifts her toes so just the narrow spike of her heel is pricked into the floor – then places it down. These shoes are six-inch, flower-patterned high heels. You know they are six inches because you live with a woman who has a shoe fetish. The woman across the café seems to be deep in thought, as if she is focused on something important that resides on her laptop. Of course, the world resides on her laptop, on all laptops. So she could be working on her new novel, which is set in Japan and involves a husband and wife, and an unhappy cat who live near the Zenpuku-ji Buddhist Temple in the Yamada district. So far, nothing has happened between the husband and the wife and the unhappy cat, but the woman writes with the confidence that something will eventually happen. Or she could be working on a poem about the rain – how it is falling with a hesitant insecurity, as if it’s not sure about falling – about how wet it is, about how wet is makes the streets, about the heady scent that follows. You notice she is doing that thing with her foot again. It’s a tick – at least, you think it’s probably a tick – an unconscious sign that she’s thinking hard. You might wonder if she’s playing with your perception. Does she know you are watching her? Is she purposely presenting the image of a thoughtful person? Is she Schrödinger’s woman – a woman in a café who is consciously attractive and unconsciously alluring, simultaneously? Is she a woman who is aware she is being watched and at the same time, unaware, oblivious and indifferent? But she is not in a box with a decaying isotope and a vial of poison – she is alive and well, unconsciously doing that thing with her foot. She is just pretty woman working on a book about two people and an unhappy in the mountains of Japan, distracting you from the rain.