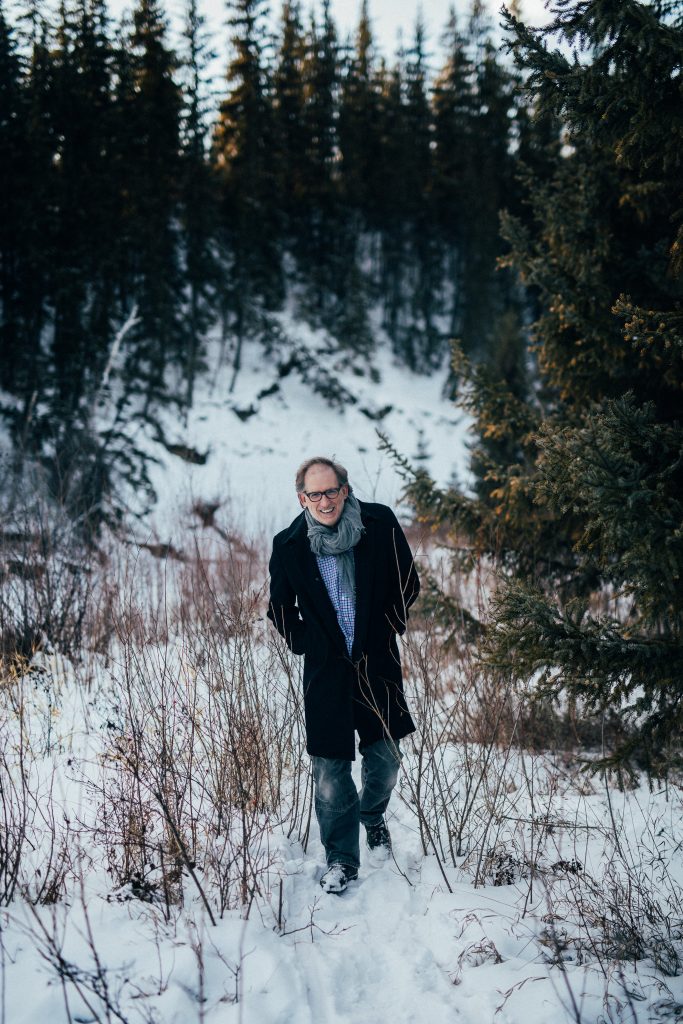 His first novel, The 52nd Poem, explores the remnants of a love affair as a man sends a poem a week to his lover over the period of a year. The book went on to win a few awards including the 2003 Alberta Novel of the Year and the City of Edmonton Book Prize.

A second novel, Doubting Yourself to the Bone, is set in the Canadian Rocky Mountains and has received high praise from critics – including being named as one of the top 100 must read books for 2006 by the Globe & Mail.

In 2009, Thomas’ third novel, Waiting for Columbus, burst onto the international stage, with a Canadian (McClelland & Stewart) and US (Knopf-Doubleday) release. In 2010, the book was released in the UK (Picador), and will be published in Serbia, Brazil and Poland. The book was released as an “audio book,” and was optioned for film in the summer of 2010. Waiting for Columbus, won the City of Edmonton Book Prize and was short-listed for the Alberta novel of the year.

He is happily married to his first reader, Cindy-Lou. They have sons, a couple of fine young men in their early 30s, and a daughter who, at 18, is still very tall for her age.

Trofimuk has recently taken up kayaking. He loves maps, and charts. He really likes new bed sheets. He’s a huge fan of single malt whisky. He loves paper, and journals. He has been known to smoke Cuban cigars. If you offer him wine, he’ll very likely accept. When he wakes up, he is delighted to be alive. He will very often say things like: It has been so delightful to have lived — to have been alive.

His latest novel, “This is All a Lie” released in fall 2017 with Enfield & Wizenty.

Below, are a more concise biographies

Thomas Trofimuk
Thomas Trofimuk has published both poetry and fiction in literary magazines across the country, and on CBC radio, podcasts, CKUA, and the RoadHome.FM stream. He is a founding member of the Stroll of Poets and the Raving Poets movement in Edmonton. He was also the festival director of the ROAR Spoken Word Festival for two years. His first novel, The 52nd Poem won the George Bugnet Novel of the Year Award and the City of Edmonton Book Prize at the 2003 Alberta Book Awards. His second novel, the critically acclaimed Doubting Yourself to the Bone, was named as one of the Globe and Mail’s top 100 must-read books for 2006. A third book, Waiting for Columbus, was released in August 2009 in the US, Canada, the UK, Serbia, Poland, Brazil, China and Quebec (in translation). Waiting for Columbus won the City of Edmonton Book Prize, was a nominee for the 2011 International IMPAC Dublin Literary Award, it was a Richard and Judy Book Club pick for fall 2010 and was picked as one of Richard and Judy’s 100 Books of the decade. A new novel – This is All a Lie, was released in fall 2017. Thomas can be found on-line at www.thomastrofimuk.com. He lives (and writes) in Edmonton, Alberta, Canada.

Thomas Trofimuk
Thomas Trofimuk is an Edmonton writer who does not come lightly to the blank page. He has three books out in the world (The 52nd Poem, Doubting Yourself to the Bone, and Waiting for Columbus) and a fourth novel, This is All a Lie, published in fall 2017. He’s a long-time teacher at Youthwrite, and a world-famous, spasmodic dancer who very likely trained with the Bolshoi Ballet Company.